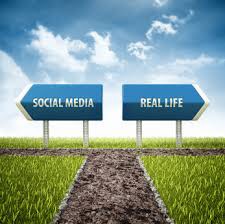 On the drive into work yesterday, I listened to the Ted Radio Hour podcast, an episode called Screen Time – Part I. The podcast explores how screens have changed our life to date and tries to answer the question: What’s next? One of the coolest things I heard was about virtual reality movies — I tried it out myself tonight via Vrse, an app that lets you take control of the movie point of view. It’s pretty neat.

As I listened to the dialogue on screens, though, it got me thinking about my own screen existence, the Mel who exists not in three dimensions in Illinois, but in two dimensions anywhere in the world there is a device connected to the Internet.

I entered social media in April 2007 for a silly reason. I had lost the contact information for my youngest brother and I suspected he was on Facebook. I worked at a university at that time so I had the necessary .edu email address to sign-up. So, I did it. I found him, connected and confirmed all was well. I never really intended to be a social pioneer.

But, once online I found I enjoyed the opportunity to connect with people in new ways. Like the more than 1 billion other people who have accounts on Facebook, I found that the ability to share my life and experiences with people I cared about was fulfilling. In the beginning, my posts were pretty lame. Because the Facebook prompt started with your name, some of my finest examples were:

Exciting, thought-provoking and interesting…not so much. Honestly, it’s a testament to the human need to be connected that the platform (and my friend group) survived such enlightenment. Maybe it was just the pictures of the kids.

From my history, it looks like sometime in late 2010 or early 2011 Facebook changed their prompt to the current ‘what’s on your mind.’ My posts started to get more interesting, because talking about me (and what I am doing) is significantly different than asking what is on my mind.

What isn’t on my mind?

My grandfather once asked me why I bother with this new fangled thing. We were talking about some news story where someone posted something inappropriate or got caught in a lie or something. He felt it was a stupid risk to take. What’s the point?

I remember the conversation because it brought to life my entire philosophy for sharing online. I am a natural sharer and I’ve built most of my relationships by being the first person to put something out there. It’s just who I am. But, I have created some guardrails for myself — things that have helped me build (and not break) connections.

I avoid sharing on polarizing topics, especially early in relationships. I avoid sharing opinions without sharing the story that got me there. I avoid sharing personal stories, even important ones, when I know they could trigger very painful feelings for someone else. My ‘watch out’ areas in real-life are all places where I have had a painful experience hurting someone or pushing someone away. Unintentionally.

So when I was having that conversation with my grandfather, what I said was simple:

There isn’t any more risk online. My brand and the way I am there is exactly the same as it is in real life. If I wouldn’t share it in person, I don’t put it online. If I would share it in person, I put it online. Periodically, I scroll through my own wall and I check: is this me? If someone saw this would they see me? If it is, great. If it isn’t, I calibrate. There’s no more risk to me being on Facebook than getting up in the morning and walking around and living. I stand by who I am.

For me, that is the big risk in the digital space. If you want to be someone other than your authentic self, you will have a hard time keeping your selves aligned. If you say something intentionally hurtful or unintentionally insensitive, it’s not just your buddy over a beer — now the audience is anyone and anytime. If you care about building relationships, thoughtful authenticity is the only real way to handle life in a digital age.

And, trolls had best be prepared to live under a metaphorical bridge.