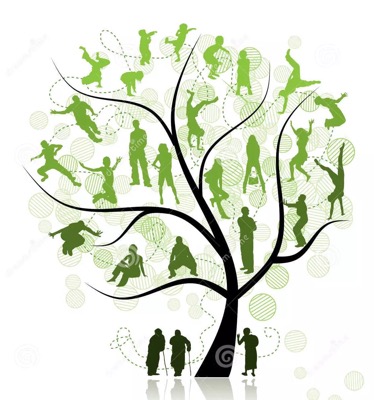 On my Friday drive into work I was contemplative. So many things were running around in the gray matter between my ears that I popped on a podcast. Let someone else have the thought leadership, I reasoned.

I picked the second part of the Ted Radio series on the impacts digital technology (Screen Time – Part 2). And as I listened, this segment was nuzzled toward the end.

I’ll pause a moment so you can listen…

Have you listened? Ok, good.

Now, I have given a lot of thought to the archival value of Facebook and this blog to me. I’ve even considered how a record of me might help me stay connected with my contemporary family. But never once did my brain swell enough to consider that my grandchildren — nay, my great grandchildren — will be able to use this to see who I was.

Think about that for a minute.

One of the hardest things to do is wrap your head around the fact that the elderly people in your life were once just like you. That they struggled with math tests or dated someone inappropriate or were the parent who didn’t know the first thing about anything. And yet, when you meet them, they are already fully baked (in your eyes at least) with all of the answers.

I was lucky, because my grandfather is a storyteller. There isn’t a visit that goes by that doesn’t include a story. And many of the stories have  been about his childhood. Later in life, after my grandmother passed away he even wrote it down in a book. I have treasured the stories and the book as a way to understand him and our connections.

But, in someone’s digital archive you have not only the stories but the connections of stories. I can think of my kids telling their kids’ kids that I was the oldest of three kids, and then showing them the posts between me and my brothers. Or that I was really close to my mom, her nana, and showing them those posts. Or talking about how they were both in my cousin’s wedding when they were little and pulling up pictures. I didn’t get that with my grandfather.

And when some little kid asks, “But what was she really like?” they can read for themselves. They can form their own opinion based on the primary evidence. They can see from what I put online, how people responded and how I responded back. They will know me not from my stories years later or from the stories that are passed on generation by generation. They will know me from the way I told the story at the time it formed.

Now that my mind is open to the possibility that what I write is not just for today but for generations to come, I’m not sure what will change. But the idea that one of my descendants might read this someday — might meet me virtually across the years — gives me pause. It reminds me that we are all part of a cosmic pattern and that even if I feel ineffective or unworthy or insignificant someday in the distant future I will be history. No, I will be someone’s history.

How cool is that?