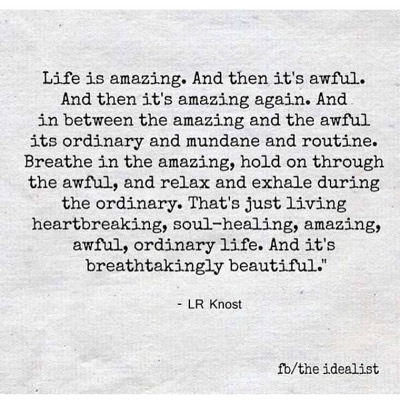 I have a Facebook friend who engages via memes. I rarely see a post from her that is a simple sentence, instead it is rapid fire memes — pop, pop, pop, pop — one right after the other. It can be weeks between postings or 20 in an hour in the middle of the night so that they are lined up like soup cans.

The other day, she was up and posting in the wee hours of the night. So many posts that I was worried and private messaged her to make sure she was ok. One of the memes caught my attention and I thought of it throughout the day and into the week. Straight through to now, when I am finally able to sit and write. It said:

Life is amazing. And then it’s awful. And then it’s amazing again. And in between the amazing and the awful it’s ordinary and mundane and routine. Breathe in the amazing, hold on through the awful, and relax and exhale during the ordinary. That’s just living heartbreaking, soul-healing, amazing, awful, ordinary life. And it’s breathtakingly beautiful. -LR Knost

I needed to read that, needed to see it, in the very moment it came onto my tablet screen. Because I was perilously close to forgetting the reality of balance.

Here’s the thing. When things are awful, the awful slides across your life like a smog that can’t be cleared. Every awful memory lines up in front of you to remind you just how many awful moments have fallen upon you. One after another they paint your life with a pattern of angst and pain and heartache — as if the awful moments have majority rule over your life.

The same can be true of the amazing times, too. When endorphins are raging in your heart with love or joy, a promotion or a present, everything is great. Nostalgic for the good times, everyone’s in love, the world is a place of promise. Risks can be taken and bounty shared.

And, everyone has been stalled in the ordinary. When the boredom and the monotony lead to the feelings of, “Is this really it? Is this the promise of my life?” The quintessential midlife crisis is nothing more that a desperate need to claw out of the ordinary, to prove to oneself at least that there is more to life that waking up, persisting through the day-to-day and going to sleep to do it again.

What I love in what LR Knost said is that it reminds me, if I am open to listen, that none of those moments define me. Instead, like the four seasons of my Midwest home, I am defined by all of the moments. Yes, I am the glorious awesome of a sun-kissed sky, top down in my convertible. I am also buried in layers tromping through snow drifts up to my knees. And, I am the cool but pleasant fall and the green but wet spring. I am a full year.

And, I needed to remember that this week, because I found myself at risk of losing perspective. I found myself whip-sawing from ‘woe is me’ awful to ‘joy to the world’ awesome, trying to draw a trend through just two data points. Until, I saw the meme and reminded myself it’s a squiggle — that life is awesome and awful and ordinary.

Nothing wrong with a squiggle.

Middle-aged business exec who had aspirations of being a writer someday. I believe that lifting people up through authentic and vulnerable storytelling creates connection and possibility. My story may not be the most inspiring, but it is the one I know the best and have the right to share. View all posts by Mel