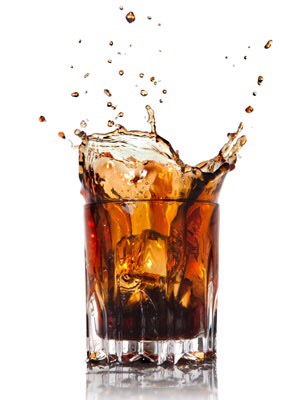 I woke up at 3:30am this morning to catch a 6:45am flight. I’m not a freak, so I struggled a bit to get up and get going, especially because I knew it was going to be a rough day. Traveling all morning and then an afternoon of meetings and presentations three time zones away would mean a long day, no matter how you look at it. So, when I got the text in the car to the airport that my flight was delayed I knew that it wasn’t good. My connection would be blown and I’d be standing in lines trying to put Humpty back together again.

After I had successfully rebooked my ticket and navigated security I decided to grab breakfast. I found a quiet table in a restaurant near a power outlet and ordered. I popped over to my bags and got my electronics out and as I was plugging in my chargers I heard a voice over my shoulder, “I’m behind you, sweetie.”

I thanked the waitress for the heads up; if I had backed into her it could have gotten wet and sticky for both of us. And because it was empty in the restaurant, I took the time to tell her about the last time I had found myself on the receiving end of a full diet pop.

I was having lunch at the university where I worked and a young student waitress got unbalanced and spilled an entire glass of diet pop down my back. It was exceptionally cold and soaked my sweater and my pants. The young woman was mortified — who wouldn’t be? I could see her spiraling downward and somehow in that moment I only knew one thing: how I responded was important. She was a student and for all I knew she had an exam after her shift, a critical exam in a class that mattered.

I smiled, looked her right in the eye and said, “I’m fine, don’t worry. It happens.”

To be honest, it had never happened to me before and I am hopeful that it won’t ever happen again. It was the soggiest lunch I’ve ever had, as I sat there finishing my meal. But I continued to smile, carrying on pleasantly with my lunch companion as if I wasn’t soaked, sticky and miserable. I tried not to think about it. I repeated the magic words several more times every time she stopped by to check on us, “Don’t worry, it happens.”

Once we had paid I walked back to my office, told my team what had happened and went home and changed.

After I shared the story with Mindy, she opened up with her own story of a waitress who had spilled an iced tea on a woman’s coat. Unfortunately, the customer response in that situation was much different. She had called the waitress names and refused to accept any apology (including purchase of a new coat by the waitress). When Mindy shared it, I could tell the story was well-traveled, the kind of cautionary tale that coworkers tell the newbies and chat about when work is light.

Hearing it, I wondered for the first time if that young waitress tells our story. Did it impact her beyond that day? She’s in her mid to late 20’s now, out in the world somewhere likely doing something other than waitressing. Maybe it was a moment easily forgotten, or maybe a random kindness one shift in the spring semester is something she remembers.

Gosh I hope so.

Life happens. The good and the bad and everything in between. A delayed flight, a spilled drink, it’s just part of the complex spinning of the world that I can’t control. All I can control is my response and I try to respond to bumps with grace and empathy. I don’t want to sit in an airport for an extra couple of hours, I don’t want to rush frantically after I land to get to a presentation for 400 people. But, I will. And who knows, something awesome may come out of it.