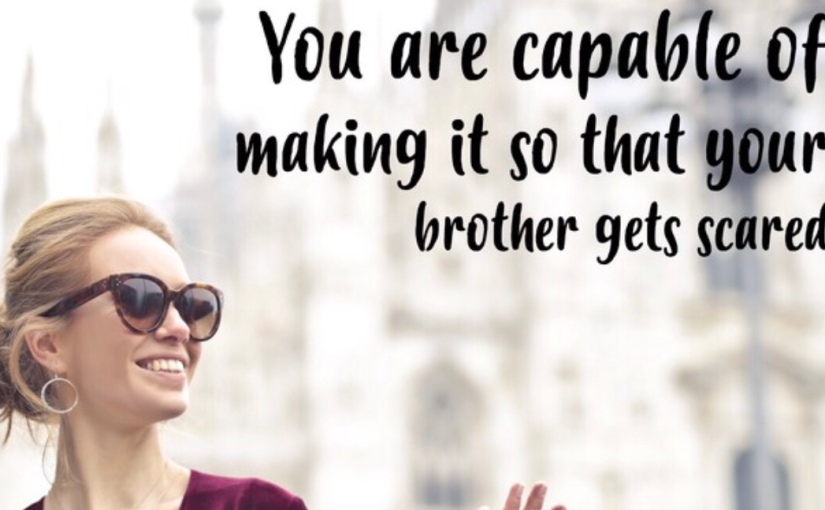 One night during the dark of winter I found myself with a complete lack of inspiration. Sitting there with my iPad on my lap I desperately wanted to write something witty and instead was stalled. Normally when that happens I cop out and scroll through social media or flip over to a word game, but that night I did something else.

I begged the internet for inspiration.

Earlier that week I had listened to an episode of This American Life focusing on a technology designed by two guys in Oslo, Norway called Inspirobot. The software uses a huge library of phrases and pictures (and clearly a fabulous algorithm) to come up with the equivalent of on-demand inspirational posters. The developers have tried to explain to incredulous users that no human being is behind the pictures — but they just can’t believe in mechanized meaning.

I must have clicked the “generate” button 30 times and I quickly understood why people want to believe in it. Some of the results were gibberish, but there were some that had a sliver of truth, just enough to make a connection. The one that I pulled for the graphic on this blog is a good example. It shows a picture of a stylish and happy woman with the phrase “You are capable of making it so that your brother gets scared.” When it popped up I laughed out loud. I am a happy woman who aspires to be stylish and both of my brothers are (in one degree or another) scared of me.

It felt like someone was writing a joke just for me.

Of course, Inspirobot wasn’t doing anything for me. I had simply clicked a button that kicked off a stored routine on a server somewhere hundreds or thousands of miles away. It wasn’t Inspirobot that was making a joke, it was me. It was my more than forty years as a bossy big sister and my love for my brothers that had made meaning out of a inherently meaningless sentence and picture.

Listening to the podcast and laughing at Inspirobot reminded me that I have a lot of power to create meaning in the world. I am exposed to thousands of words, images, and actions every single day and I run those things through the filter of my lived experiences. How many other people would have seen the image I did and grimaced or cried or felt completely unmoved? What about the woman who lost a brother to a tragic accident? Or the man who had been abused by his sister?

I went back out to Inspirobot today as I was finishing this post and decided to see what witticisms it had for me, what I could learn from its coded crystal ball. I got… 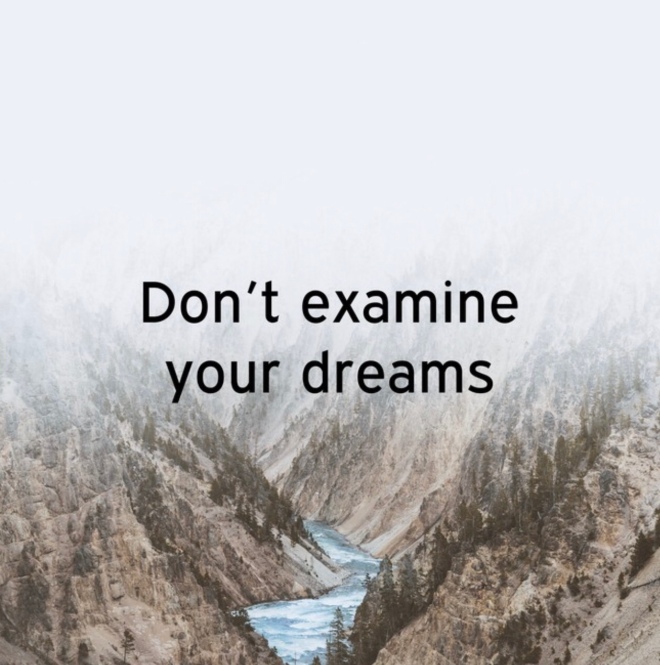 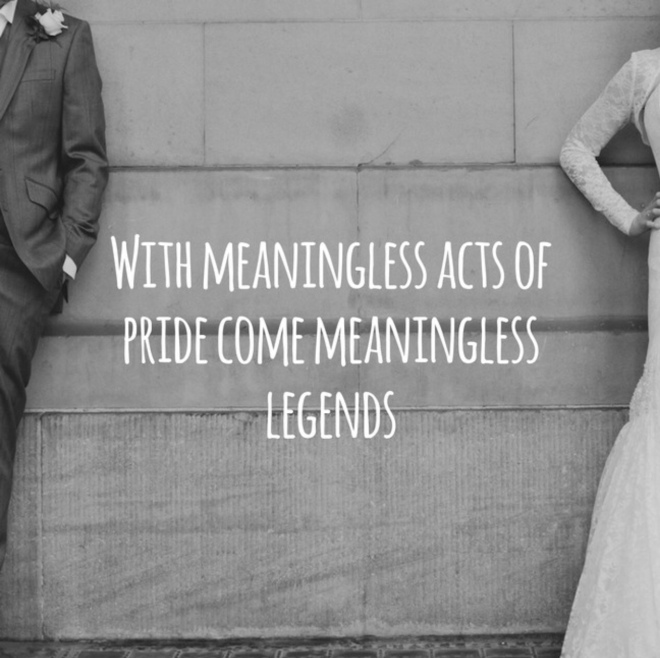 I could read something into each and every one of those pictures, find some way to bring meaning into the story they never intended to tell. Inspirobot reminds me that I need to be careful in my assignment of meaning to the signs and symbols and to be open to the unintended signals I am sending out into the world. And if I’m not sure whether or not I’m manufacturing meaning from the meaningless, I can ask myself a question.

What would Inspirobot say?

Everyone has hot buttons. Some people can’t stand it when people merge last minute at a lane closure, while others are annoyed when people get over too soon. Some people like to arrive just in time at the airport while others panic if they aren’t there early, preferring to sit quietly at the gate. People have emotional reactions to mannerisms, manners, or moments. Personally, I struggle to remain composed in situations where I feel that others are talking down to me, especially when sales people swivel their heads away from me to talk to my husband.

But, as hard as that situation is I’ve learned to get through it. My husband and I have worked hard to show up as partners and there are even times when we’ve used society’s tendency for male decision rights in our favor. The one thing I haven’t found a way past is being described by a single, simple word: intimidating.

The first time it happened, I thought it was a mistake. I’m just a bit over five feet tall and the idea that anyone could feel threatened or afraid of me was laughable. But the person sharing the feedback was a close colleague and quite sincere and I quickly went from amused to shaken. I rationalized it away (it’s not you, it’s them) but that only worked for so long. Over the years that crappy word kept popping up and when something won’t go away you have to acknowledge its reality, whether you like it or not.

Last month it reared its ugly head. I was wrapping up my time at a women’s leadership development conference and I had asked a colleague for feedback. Specifically, I shared that this year I had swiveled from my own development to focusing on supporting the needs other women at my company. I asked, “How did I do? What more could I do to support them?”

The early feedback was encouraging and positive. They highlighted my energy and positivity and the fact that I seemed to be omni-present. And then they noted that the junior-level women seeing me might compare themselves and determine that they couldn’t aspire to my level. The dagger plunged in as they said, “I worry that you are a bit intimidating.”

I didn’t want to wince, but I know I did.

I defensively shared my own story of growing into my confidence. I talked about my belief in each person deciding what success and happiness looks like for them. I expressed how often I feel like I don’t do enough for my company, for my family, and for myself. I had just heard Brene Brown talk about vulnerability and I wanted to plead, “How the heck can I be intimidating when I am so clearly flawed and failing myself?”

This blog post has been sitting in draft status for nearly a month as a contemplated what the heck is going on with this word. I have had “write the post on being intimidating” as a goal for the last four weeks and each week I have had to mark it as incomplete. Every time I found the time to sit down and write I would stare at the word, feel defeated, and play Wordscapes on my iPhone. I just couldn’t figure it out.

Yesterday I realized that the problem is that I have been intimidated by people and I have formed my own opinion about what that means. For me, intimidating people seek to overpower and demean. They are bullies that find the soft underbelly of another person and push. They wait for someone to be down and kick. The harder the better. They are the people who cause me to cringe, knowing that I will have to work with them to deliver some important outcome. I don’t let it stop me, but I do have to spend significant time psyching myself up to counter their “win at all costs” mentality and to formulate a solution that won’t mean carnage on either side.

I know those intimidating people and the last thing in the world I want to be is one of them.

Just yesterday I had a conversation with someone who had made a hard decision to leave a position they loved because they didn’t feel supported. Knowing their talent, contribution, and reputation I immediately felt guilty. Why didn’t they come to me? Why didn’t I see it? Could I have helped them find a path forward that would have allowed them to thrive? I told them how confident I was of their continued success, offered a few ideas on how to navigate transition challenges, and then shared how much I wished I had been more aware of the situation so at least they wouldn’t have felt alone. Inside my heart I wondered whether they had felt intimidated — whether that had created a barrier for reaching out.

I’m not sure I’ll ever know.

Over the years, I have accepted the fact that who I am and how I show up in the world will impact people. I try to express my values authentically, both in real life and in the virtual world of my blog. Each day I try to be transparent about my intent and to be open to adjust when my execution fails to meet that intent. I just hope that some day people will feel less intimidation and more admiration when they think if me — that they know if they come with a good heart hoping to grow that they have nothing to fear from me.